The Kamikawa Ainu have performed a ritual to recognize the achievements of their great ancestors. One such ancestor is Kucinkoro, a leader who opposed a forced relocation order issued in 1869 by the Ishikari Office of the Ministry of Military Affairs and who protected their living spaces. Another ancestor is Umetaro Matsui, the founder of the woodcarving industry of the Kamikawa Ainu. Matsui began crafting carved wooden bears in the late Taisho period (1920s) and dedicated himself to the development of the Kamikawa region and the next generation of woodcarvers. 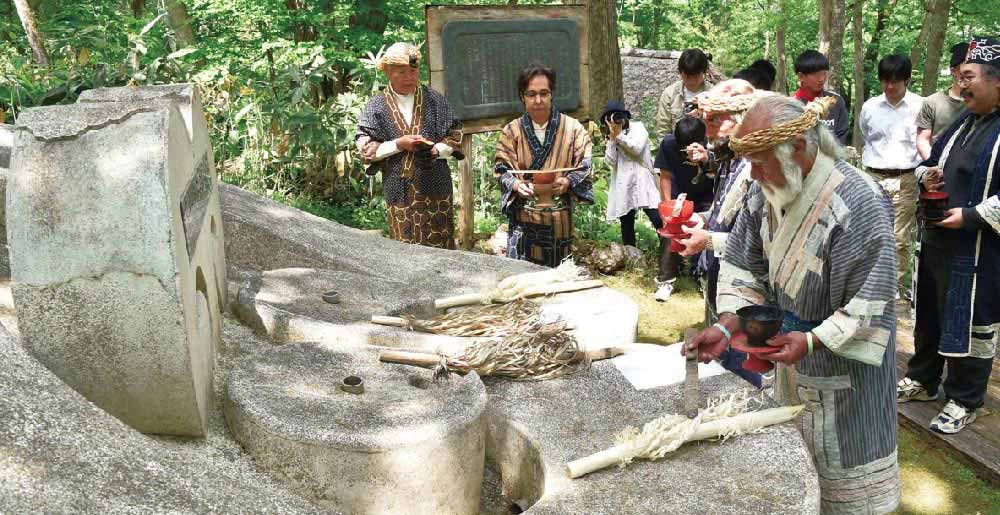 (1)Kucinkoro, the leader of the Kamikawa Ainu

In the early Meiji period (late 1800s), the Kamikawa Ainu that lived at the head of the Ishikari River were ordered by the government to move their home to Ishikari. Kucinkoro was the leader of the Kamikawa Ainu who protected his people by challenging this decision, and the Kucinkoro Monument was erected to honor his achievement. Kucinkoro is also known to have led explorer Takeshiro Matsuura through the area in the late Edo period (mid 1800s). Matsuura is credited with giving Hokkaido its name.

Craftwork was one of the occupations of the Kamikawa Ainu dating back to the Meiji period (1868 to 1912). Umetaro Matsui, in particular, was known for carving expressive bear figures with incredible skill. An adept bear hunter, his woodcraft expressed the form and action of the bears ingrained deep in his memory. His Kamikawa Ainu history instilled him with a strong reverence for trees, which he passed down to his pupil who further improved the craft. Because of this, bears carved of wood became a product that Hokkaido is known for.