The Daisetsuzan Mountain Range is noted for its spectacular 360-degree panoramic views of the region, including gorges covered with perpetual snow, beautiful waterfalls cascading down sheer cliffs, high-elevation ponds, and seasonal carpets of lovely alpine flowers. Alpine butterflies found only here and trees that blaze with autumn hues are also part of the natural tapestry of the region.
The Kamikawa Ainu adored and revered this beautiful mountain range and called it Kamuy Mintar, the playground of the gods.
The Ishikari River flows to the ocean from this range. 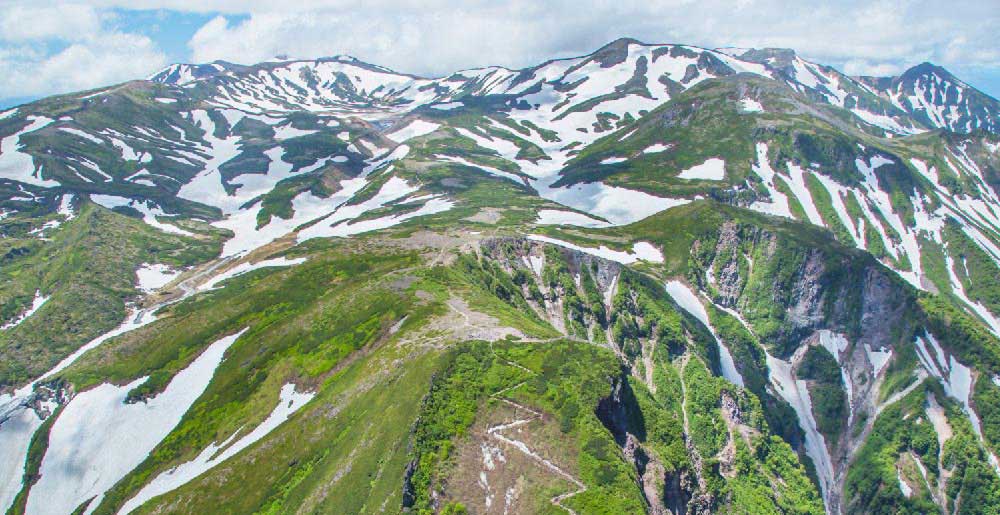 The Daisetsuzan Mountain Range, called Nutap Kamuy Sir or Nutap Ka Us Pe (the mountains towering over the great wetlands), was adored and revered by the Ainu people of Kamikawa. Because of its mystical mountainous landscape and abundant varieties of alpine plants, the area was often referred to as Kamuy Mintar, the playground of the gods. The range’s tallest peak is Mt. Asahidake, which reaches 2,291 meters. At the foot of this peak is a hot springs village where the Ainu festival of Nupuri Kor Kamuynomi is held every year to pray for the safety of mountain climbers and other travelers. Keigetsu Omachi, a writer active during the Meiji and Taisho periods (late 1800s, early 1900s), challenged the length of these peaks before a trail had been established, sharing the presence of the range with the world through his travel journals.

At 270 meters, Hagoromo Falls is the longest waterfall in Hokkaido. Water bends and refracts beautifully as it falls from the seven levels of sheer cliffs at this designated Hokkaido Site of Scenic Beauty, the flowing shape of which has been likened to a traditional maiden’s robes. The area is a popular tourist destination in autumn, when the season’s colored leaves frame the falls. Kibao-monogatari by leading animal story author Yukio Togawa was set in the old village of Higashikawa against the backdrop of Hagoromo Falls and Daisetsuzan Mountain Range, and his beloved, moving tale of the bond between human and animal is still published as both novels and children books to this day.

Located in central Hokkaido, the Sounkyo area comprises gorges carved over the eons by the Ishikari River. They stretch for 24 kilometers through the northern foothills of the Daisetsuzan Mountain Range. The Sounkyo area was called Sounpet (a river with waterfalls) in the Ainu language before the writer Keigetsu Omachi renamed it Sounkyo using the Japanese characters so un (layers of clouds) and kyo (valley) in 1921 when he visited. The volcanic tuff has been eroded into huge, Gorge that tower more than 100 meters high and feature vertical columnar joints (joints that form when lava cools and hardens). Sounkyo is a popular tourist destination in the Daisetsuzan Mountain Range, particularly for picturesque locations that include the Obako cliffs, Ginga Falls and Ryusei Falls, and for hot springs that well up in an area near the Ishikari River’s confluence with the Akaishi River and the Kurodakesawa River, two of its tributaries.

A variety of almost vertical waterfalls both large and small extend about 15 kilometers down the columnar jointing (joints that form when lava cools and hardens) that makes up the cliffs in the valley of Sounkyo extending from the foot of the Daisetsuzan Mountain Range. Of these, Ginga Falls (120 m) and Ryusei Falls (90 m) are the two most well-known, referred to as the wedded falls because they cascade down the cliff side-by-side. The pair can be taken in from Sobakudai observation deck.

The Daisetsuzan Mountain Range is known as the canopy of Hokkaido and expresses the beauty of each passing season. The Kamikawa Ainu revered these peaks, calling them Nutap Ka Us Pe, the mountains towering over the great wetlands, and Kamuy Mintar, the playground of the gods. A ropeway runs up to the 5th station of Mt. Kurodake (1,984 m) along a course that runs the northern side of the range with a lift that can be taken up to the 7th station. This is the perfect place to see alpine plants in bloom or climb to the summit to take in a view of these peaks, which remain snow-capped through the summer.

Wetlands large and small dot the mysterious plateau that extends from the back of Mt. Asahidake, the tallest peak of the Daisetsuzan Mountain Range. From mid-September to early October, the mix of conifer and broad-leaf trees that make up the forests here are filled with breathtaking autumn colors. The area is the brown bear’s natural habitat, so visitors are required to first listen to a lecture on bear safety at the Brown Bear Information Center before traveling the area. The area is said to be the source of the highest hot springs in Hokkaido.

Obako is one of the picturesque locations Sounkyo is known for. The area name, which roughly translates to “box”, comes from the sheer cliffs rising on either side to form a box-like shape. The Ainu called this place Suop Nisey (box of cliffs). These sheer cliffs that make the breadth of the Ishikari River appear so narrow are columnar jointing. This is a phenomenon that occurred around 30,000 years ago, when lava flowing from the eruption of Ohachidaira on the Daisetsuzan Mountain Range cooled and constricted to form even joints. These cliffs look like a series of hexagonal columns when viewed from above.

Genshigahara are wetlands situated at medium to high altitudes (1,000 to 1,300 meters) on Mt. Furanodake, the southernmost peak of the Tokachi Mountain Range. Stretching a total of 115 hectares, the area is designated as a Daisetsuzan National Park “Special Protection Zone”. You can travel this area by foot if you take the mountain route from the Furano side heading toward the summit of Mt. Furanodake. This is the same route that was once traveled by the Ainu of Kamikawa and Tokachi as well as the great late Edo period (mid 1800s) explorer, Takeshiro Matsuura.

Mt. Tokachi (elevation 2,077 m) is a major peak in the beautiful Tokachi Mountain Range in the southern part of Daisetsuzan National Park in central Hokkaido. This active volcano has created a unique landscape of volcanic slopes. A trail from Tokachidake Onsen runs up Mt. Kamifurano and Mt. Kamihorokamettoku and on to the summit, which commands panoramic views of the surrounding mountains and a town spreading at their base.

A subspecies of Dolly Varden trout known as the Miyabe char inhabits Lake Shikaribetsu. It differs from other Dolly Varden subspecies widely found in rivers of Hokkaido. What most distinguishes the Miyabe char is that it has more gill rakers, because it consumes more plankton in the lake. Miyabe char migrate from the lake up the Yanbetsu River to spawn, after which they swim back to the lake. The fish, whose body has beautiful pink or orange spots, grows to 25 to 30 centimeters long. In the past, some grew longer than 50 centimeters. Currently, the fish inhabits the waters of the lake’s northern bank and the river flowing into those waters. It is designated as a prefectural natural monument of Hokkaido.

（12）The Great Forest of Mikuni Pass

At 1,139 meters, Mikuni Pass is the highest national roadway in Hokkaido. Looking down from this height affords a view of a sea of trees thriving in a caldera formed during volcanic eruptions around one million years ago. This mix of conifer and broadleaf trees surrounded by the southeastern peaks of Daisetsuzan Mountain Range is a sight to behold. The center of this area was once home to the National Railway Shihoro Line Terminal and a small settlement centered around lumber shipping. In 1960 (Showa 35) it is said that over 2,000 people lived here.

Dubbed the most unexplored region in the Daisetsuzan Mountain Range, Goshikigahara is a gently sloping tableland with an elevation difference of 350 meters between its lowest and highest points. It affords sweeping views of flower fields of mostly alpine snowbed species, as well as a close-up view of Mt. Tomuraushi. To reach Goshikigahara, climb the steep slope from Numanodaira to Numanohara Marsh. After making your way through marsh ponds and passing through the coniferous forest, you will find yourself on the plateau, which lets you take in the grandeur of the Daisetsuzan Mountain Range. Goshikigahara is on a traverse route to Mt. Tomuraushi, Mt. Chubetsu and Mt. Hakuun.

Stretching out from an altitude of 600 meters, the plateau of Nupka Hokkaido Shihoro, Daisetsuzan National Park, offers an incredible view of the Hidaka Mountains and the Tokachi Plain. Located inside the Daisetsuzan National Park, the area has been protected as a designated Special Natural Monument since 1977. Nupka, which means “plains” in Ainu, is home to a wide variety of alpine plants and animals. A great many people visit the camp sites and observation decks set up throughout the parks of this abundant highland area.