The Kamikawa Ainu have lived in harmony with the gods (kamuy) amidst a beautiful yet harsh natural environment in the foothills of the Daisetsuzan Mountain Range.

They have passed down legends of a battle between a demon and a heroic god at the gorges here, which are characterized by raging torrents and oddly shaped rocks. They created villages (kotan) of houses thatched with dwarf bamboo in their sacred places and continue to offer prayers to the gods.

To the Kamikawa Ainu, rivers are living beings that rise from the ocean and climb to the mountains, and they believe that headwaters in the Daisetsuzan Mountain Range are the places closest to the realm of the gods, bringing the blessings of nature. In fact, they have venerated the mountains as “the playground of the gods” (Kamuy Mintar). The culture of the Kamikawa Ainu, who have lived in harmony with the gods and passed down Ainu traditions, remains firmly rooted in the region. 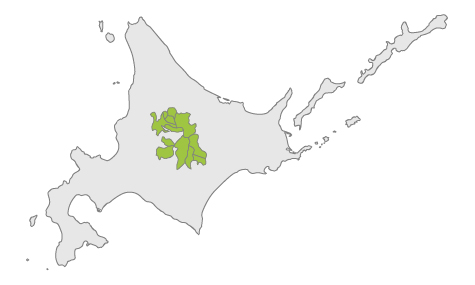 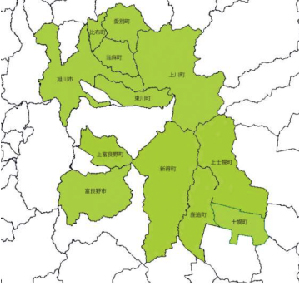 Kamikawa Ainu in Coexistence with Kamuy

The Kamikawa Ainu have lived on an equal footing with kamuy in the foothills of the Daisetsuzan Mountain Range, a place they have viewed as the playground of the gods.

They believe that everything surrounding humans—nature, animals, plants, everyday tools—has a spirit, and that when kamuy, who reside in the realm of the gods (kamuy mosir), descend to the realm of humans (Ainu mosir), they appear in the forms of mountains, rivers, bears and other manifestations.

The gods are empowered by prayers and offerings given by the Ainu in appreciation of the abundant blessings they receive. For gods who bring misfortune, the Ainu dole out punishments and pray for blessings going forward.

The Kamikawa Ainu, also known as “people living at the upper reaches” (peniunkur), have traditionally believed that rivers are living beings that rise from the ocean and climb to the mountains, and that the headwaters in the Daisetsuzan Mountain Range are the closest location to the realm of the gods (kamuymosir). They created villages (kotan) in the Ishikari River basin, prospered on trade based on the natural blessings of the river, and have passed down many legends. Follow the Ishikari River from Kamuy Kotan to a place that is sacred to the Kamikawa Ainu and onward to “the playground of the gods” in order to appreciate the traditional realm of the gods, a realm in which the Kamikawa Ainu have lived.

Kamuy Kotan (The Village of the Gods)

Kamuy Kotan, at the middle reaches of the Ishikari River, is truly a sight to see. The torrents of water that cascade between unusually shaped stacks of boulders on both banks evoke the feeling that something more powerful than humans must dwell here.

In the days before roads, when boats were an important means of transportation, these torrents of water and huge rocks made Kamuy Kotan the most difficult place to pass on the Ishikari River. Ainu people would row upriver to Kamuy Kotan, where they would leave their boats and proceed farther upstream on foot, which led to the creation of a village through which people and goods passed.
The rushing torrents and vortexes would occasionally swallow up boats and kill sailors. The Kamikawa Ainu have viewed the hash forces of nature here and the geological legacy of those forces as the work of a demon living in the area.

They have passed down grand stories of a battle between a demon and a heroic god. The names they gave in association with the demon include the following: Nitnekamuy O Raosma I (the demon’s footprints), for the giant holes created by the river currents into which several people can crawl, Nitnekamuy Sapa (the demon’s head), for an oddly shaped rock that resembles the face of a man giving a death cry, and Nitnekamuy Netopake (the demon’s body), for a gigantic rock on cliffs that resembles the body from which the head was cleaved.

In remembrance of the history of Kamuy Kotan, the Kamikawa Ainu have continued the ritual of offering prayers to the river god so that people can safely pass this transport chokepoint.

Mt. Arashiyama (Cinomisir), a Sacred Place for the Kamikawa Ainu

Mt. Arashiyama is more than 10 kilometers upstream from Kamuy Kotan on the Ishikari River. The mountain is known to the Kamikawa Ainu as Ci-nomi-sir (our prayer mountain) and has precipitous riverside cliffs. It was a place of religious significance for the Ainu—so much so that they used to take off their headgear and straighten their clothes in veneration before passing in front of the cliffs by boat.

At the foot of the mountain are traditional Ainu dwellings (cise) thatched with dwarf bamboo, each with a small entrance. Each dwelling has a hearth at the center, where the fire goddess is enshrined throughout the year. It is said that despite Hokkaido’s cold climate, the interior of a cise would remain relatively warm because the earthen floor would retain heat from the fire in the hearth. The window at the back of the cise is a sacred window through which gods enter and leave, and it was forbidden to peek into a cise through the window.

The Kamikawa Ainu still offer prayers to the gods, giving a glimpse into the daily lives of their ancestors, who prospered from the rich natural resources of the Ishikari River and Mt. Arashiyama.

The Daisetsuzan Mountain Range, the Playground of the Gods (Kamuy Mintar)

Travel from Mt. Arashiyama to the headwaters of the Ishikari River and you’ll find yourself in the Daisetsuzan Mountain Range, the closest place to the realm of the gods and a place whose sights have remained unchanged over the ages. The 360-degree panoramic views of pristine, majestic mountains include the whites of lingering snow at gorges even in midsummer, the greens of Japanese stone pines and the reds and whites of alpine flowers that carpet the land. You will also find the Eversmann’s Parnassian butterfly, a species found nowhere in Japan other than the Daisetsuzan Mountain Range. See them fly like yellow flower petals in breathtaking contrast with the landscape. In the foothills of the mountains is a natural paradise of sheer towering cliffs, beautiful rushing waterfalls, and lakes that sustain various organisms. Autumn arrives at the Daisetsuzan Mountain Range earlier than anywhere else in Japan. The breathtaking scenic beauty of fields of alpine flowers ablaze in autumn colors on a magnificent scale never fails to enchant visitors.

Ainu people saw the Daisetsuzan Mountain Range as a divine source of abundant food, but also viewed it as a threat to their lives because of the natural disasters that a demon would occasionally visit on them. Based on how they saw the mountain range, the Kamikawa Ainu have called it Kamuy Mintar (the playground of the gods) and have adored and revered it.

The Daisetsuzan Mountain Range gives visitors a feel of how the Kamikawa Ainu have lived in harmony with nature in appreciation of the blessings it brings. This is because some traditional Ainu rituals and ceremonies are still performed here today, including those to send the spirits of Blakiston’s fish owls back to the realm of the gods (the most formal ritual occasions in Ainu culture) and to pray for the safety of hikers.

The Lives of People Living in Harmony with Kamuy

In the late Meiji period (circa 1900), large numbers of ethnic Japanese, called Wajin, came from Japan’s main island of Honshu and settled in the region. This led the Kamikawa Ainu to be expelled from their land repeatedly and forced to give up their traditional lifestyle for life under challenging conditions. Their leader, who opposed a government order of forced relocation and who protected their living spaces, is still revered as a hero in their sacred land. In those days, the people were forced to live in extreme hardship, but they honed their woodcarving skills and crafted bear figurines, developing an industry of making such carvings as popular Hokkaido souvenirs. The Kamikawa Ainu have continued to transmit their history and traditional culture in the bosom of the Daisetsuzan Mountain Range. They have passed down various folktales and legends about kamuy, including those about tunnels leading to the underworld, an ancient Ainu battlefield and Sokonashi Numa to Yoto (a bottomless swamp and man-eating sword). Visitors are sure to be drawn into the realm of kamuy, a realm familiar to the Kamikawa Ainu, when they have firsthand experience of the timeless natural splendor and mystic elements of Ainu culture in the region.